←
→
Hanne Alpha
Typeface
Hanne Regular is a sans serif typeface. The neo-grotesk letterforms carry a friendly, rounded-off personlity throughout the characterset. The development of this typeface also meant my focused introduction to type design.
The process of making Hanne included multiple iterations while researching both 20th century modern European and contemporary sans serif typefaces. Currently, it supports all Western, Central and South Eastern European characters in addition to Pinyin glyphs.
2020
60pt
Sample ↘
20pt
10pt
The Nürburgring is a 150,000 person capacity motorsports complex located in the town of Nürburg, Rhineland-Palatinate, Germany. It features a Grand Prix race track built in 1984, and a much longer Nordschleife "North loop" track which was built in the 1920s around the village and medieval castle of Nürburg in the Eifel mountains. Jackie Stewart nicknamed the old track "The Green Hell".
Descending from the modernist movement, Brutalism is said to be a reaction against the nostalgia of architecture in the 1940s. Derived from the Swedish phrase nybrutalism, the term "New Brutalism" was first used by British architects Alison and Peter Smithson for their pioneering approach to design. The style was further popularized in a 1955 essay by architectural critic Reyner Banham, who also associated the movement with the French phrases béton brut "raw concrete" and art brut "raw art". The style, as developed by architects such as the Smithsons and Hungarian-born Ernő Goldfinger, was partly foreshadowed by the work of other architects such as French-Swiss Le Corbusier, Estonian-American Louis Kahn, and Finnish Alvar Aalto. In Great Britain, Brutalism was featured in the design of utilitarian, low-cost social housing influenced by socialist principles, and soon spread to other regions across the world, including Asia, North America, and the Soviet Bloc. Brutalist designs became most commonly used in the design of institutional buildings, such as universities, libraries, courts, and city halls. The popularity of the movement began to decline in the late 1970s, with some associating the style with urban decay and totalitarianism.
The European Union (EU) is a political and economic union of 27 member states that are located primarily in Europe. Its members have a combined area of 4,233,255.3 km2 and an estimated total population of about 447 million. The EU has developed an internal single market through a standardised system of laws that apply in all member states in those matters, and only those matters, where members have agreed to act as one. EU policies aim to ensure the free movement of people, goods, services and capital within the internal market; enact legislation in justice and home affairs; and maintain common policies on trade agriculture, fisheries and regional development. For travel within the Schengen Area, passport controls have been abolished. A monetary union was established in 1999, coming into full force in 2002, and is composed of 19 EU member states which use the euro currency. The EU has often been described as a sui generis political entity. The EU and European citizenship were established when the Maastricht Treaty came into force in 1993. The EU traces its origins to the European Coal and Steel Community (ECSC) and the European Economic Community (EEC), established, respectively, by the 1951 Treaty of Paris and 1957 Treaty of Rome. The original members of what came to be known as the European Communities were the Inner Six: Belgium, France, Italy, Luxembourg, the Netherlands, and West Germany. The Communities and their successors have grown in size by the accession of new member states and in power by the addition of policy areas to their remit. The latest major amendment to the constitutional basis of the EU, the Treaty of Lisbon, came into force in 2009. On 31 January 2020, the United Kingdom became the first member state to leave the EU. Following a 2016 referendum, the UK signified its intention to leave and negotiated a withdrawal agreement. The UK is in a transitional phase until at least 31 December 2020, during which it remains subject to EU law and part of the EU single market and customs union. Before this, three territories of member states had left the EU or its forerunners, these being French Algeria (in 1962, upon independence), Greenland (in 1985, following a referendum) and Saint Barthélemy (in 2012).
24pt
Basic Characters ↘
A
B
C
D
E
F
G
H
I
J
K
L
M
N
O
P
Q
R
S
T
U
V
W
X
Y
Z
a
b
c
d
e
f
g
h
i
j
k
l
m
n
o
p
q
r
s
t
u
v
w
x
y
z
24pt
Figures ↘
0
1
2
3
4
5
6
7
8
9
24pt
Accented Characters ↘
À
Á
Â
Ä
Æ
Ã
Å
Ð
È
É
Ê
Ë
Ğ
Ħ
Í
Î
Ï
Ì
Ñ
Ó
Ô
Ö
Ò
Ő
Ø
Õ
Œ
Þ
Ú
Û
Ü
Ù
Ẃ
Ŵ
Ẅ
Ẁ
Ý
Ŷ
Ÿ
Ỳ
á
â
ä
à
å
ã
æ
ð
é
ê
ë
è
í
ǐ
î
ï
ì
ñ
ó
ô
ö
ò
ö
ő
ø
õ
œ
þ
ú
û
ü
ù
ű
ẃ
ŵ
ẅ
ẁ
ý
ŷ
ÿ
ỳ
24pt
Symbols & Punctuation ↘
.
,
:
;
...
!
¡
?
¿
•
*
#
/
\
(
)
{
}
[
]
-
–
—
_
"
'
@
&
©
®
™
º
|
¦
№
¢
$
€
ƒ
£
¥
+
=
÷
×
<
>
%
‰
↑
↗
→
↘
↓
↙
←
↖
↔
↕ 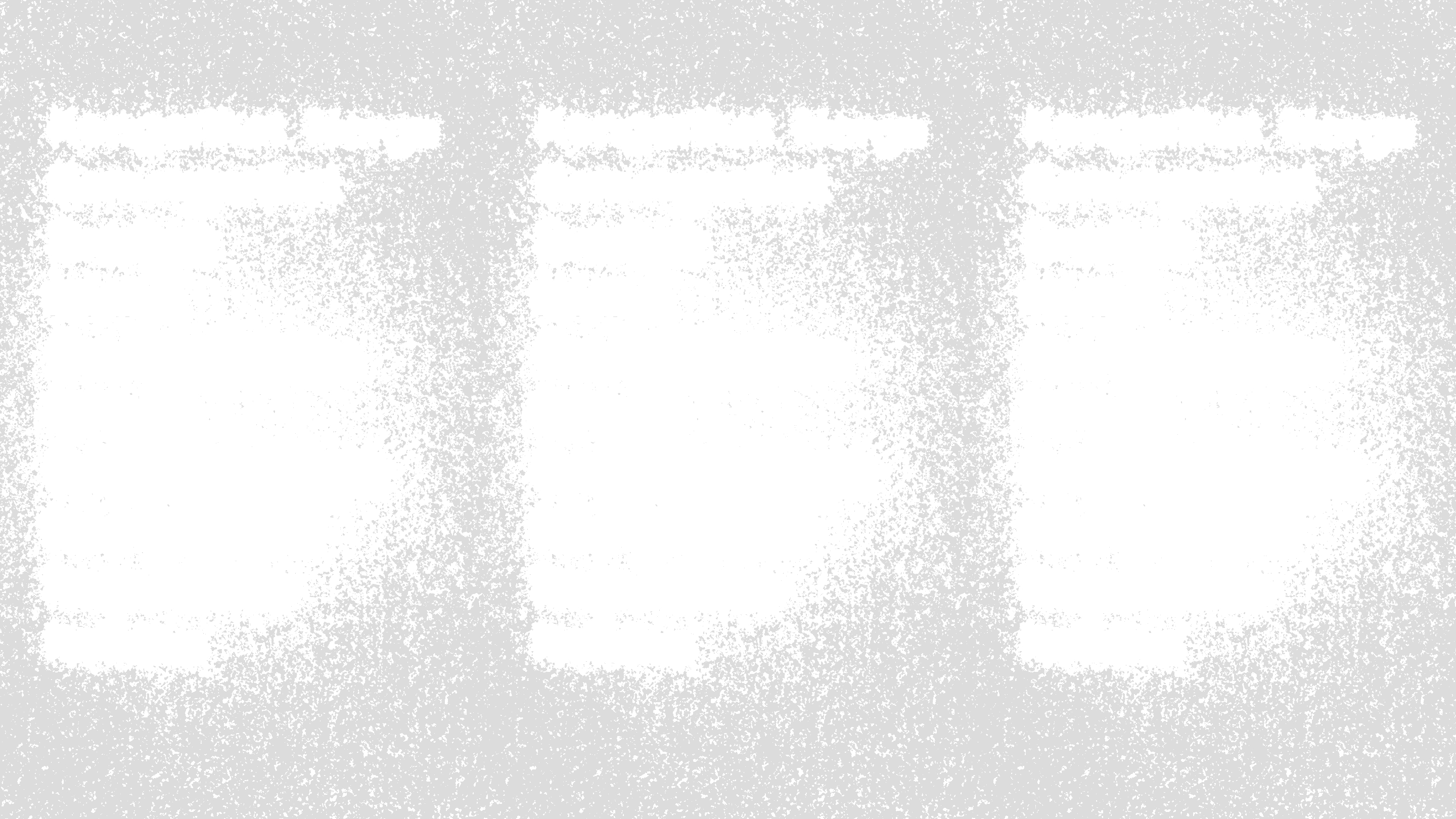 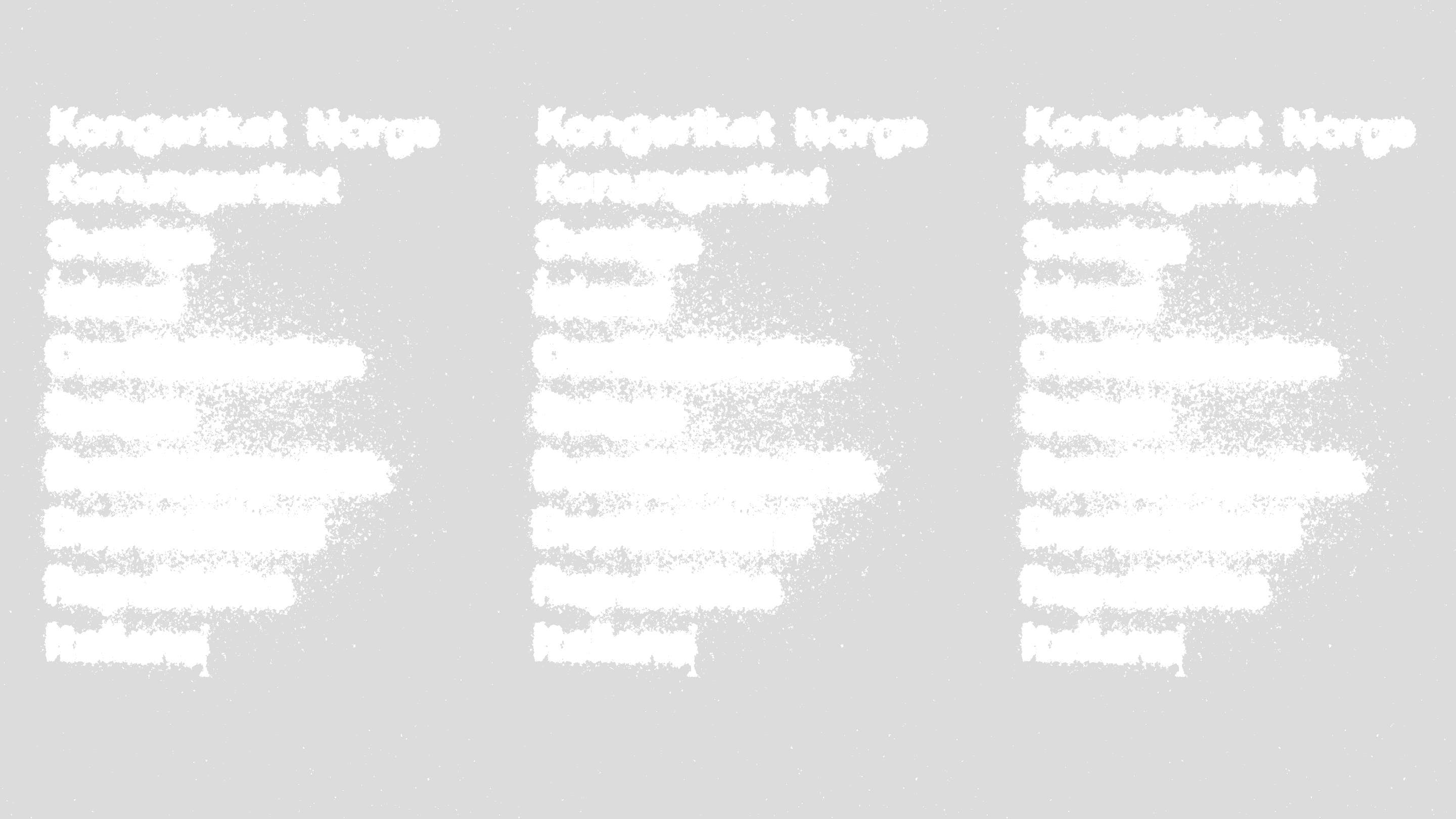 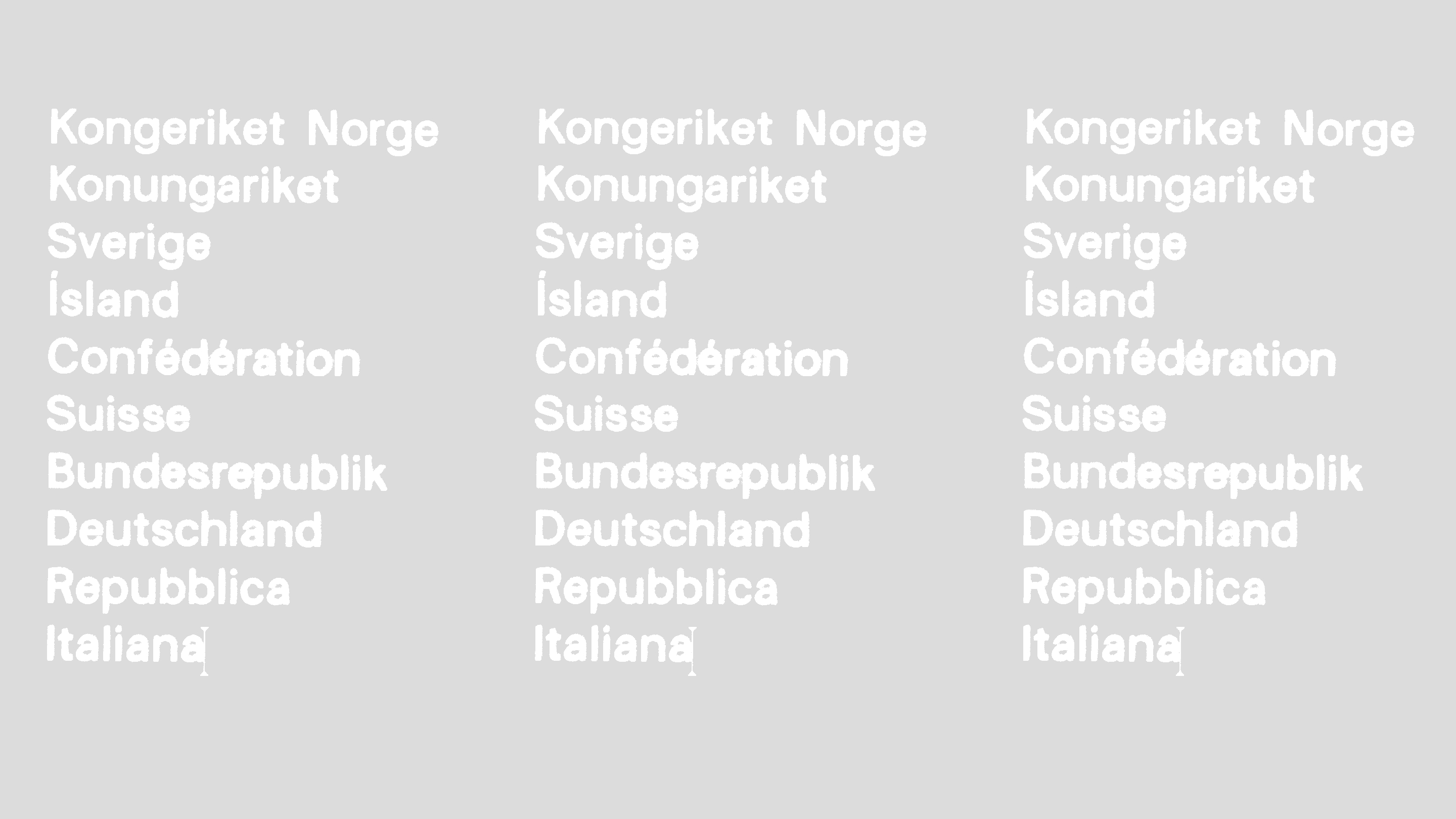 ←
→
Eyck WIP
Typeface
Eyck is an experimental serif typeface, currently in progress. It has undergone multiple iterations while reaching its final look. Conceptually, the typeface is connected to Boomheiligdom, which was a popular belief in the middle ages.
It's organic shapes are a key characteristic, which is represented in a fusion of roman and gothic styles. Additionally, it also bears a passive-aggressive personality where the sequence of letterforms results in continuous tension and release, attacking and caressing each other.
2020
Process ↘ 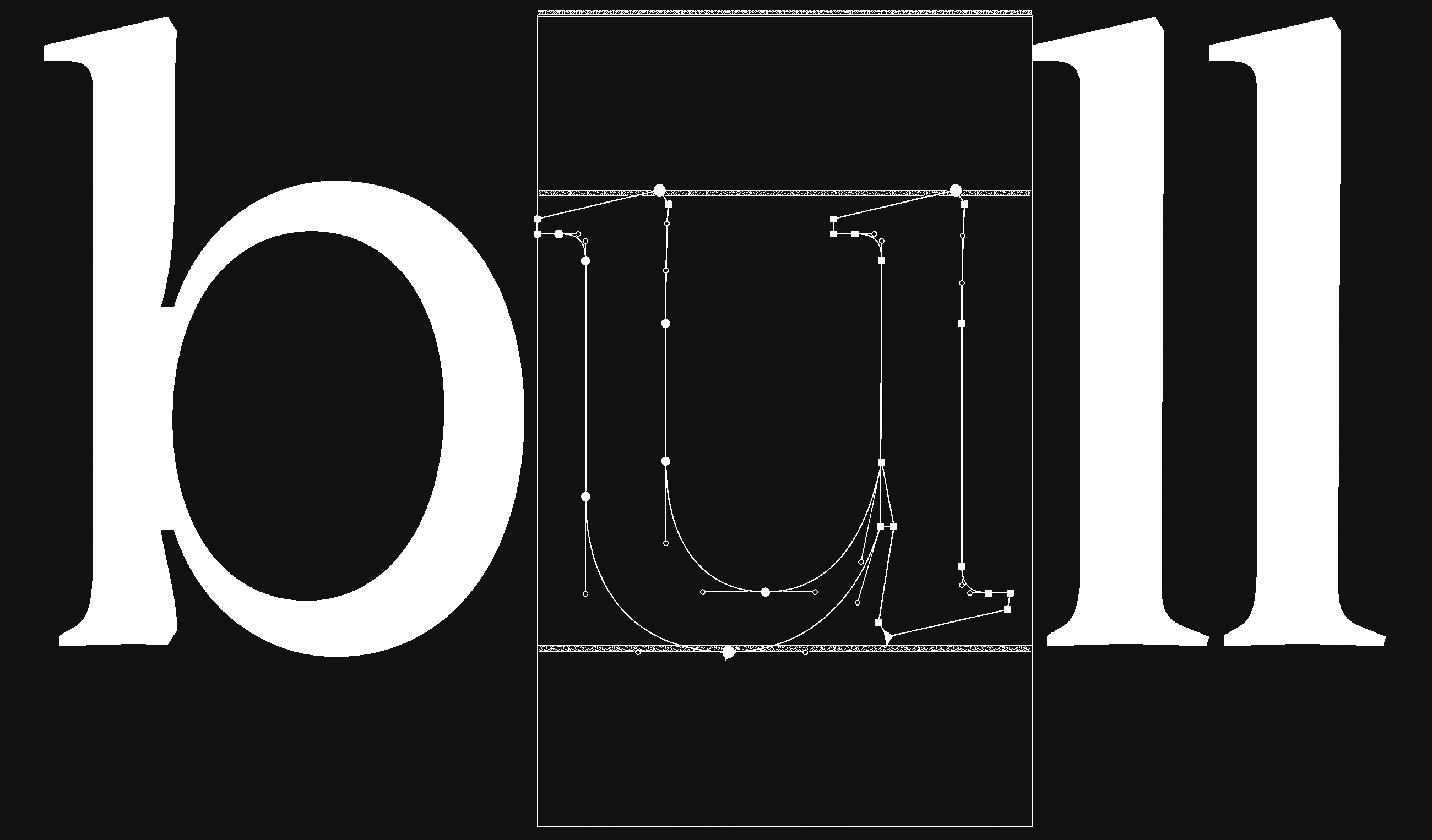 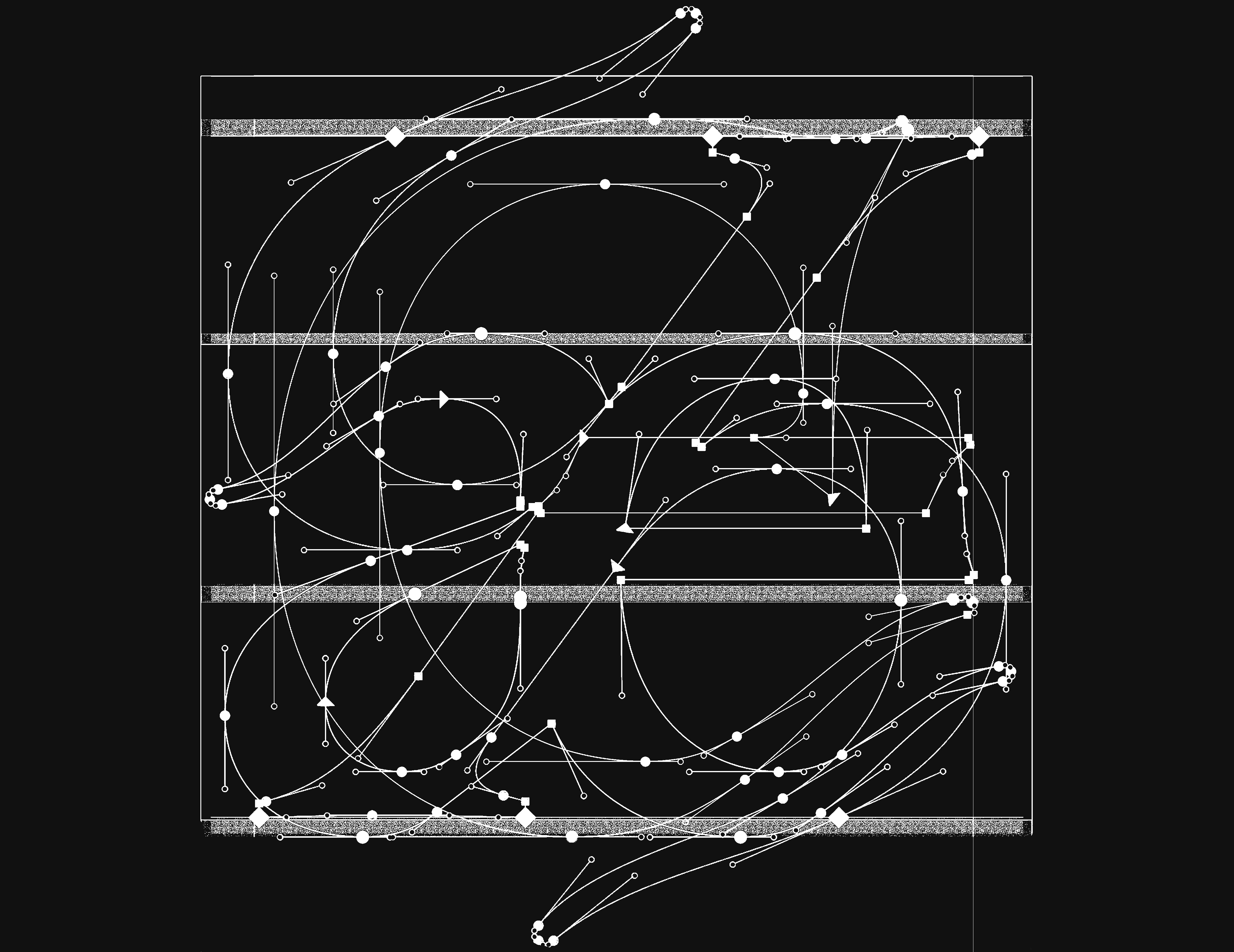 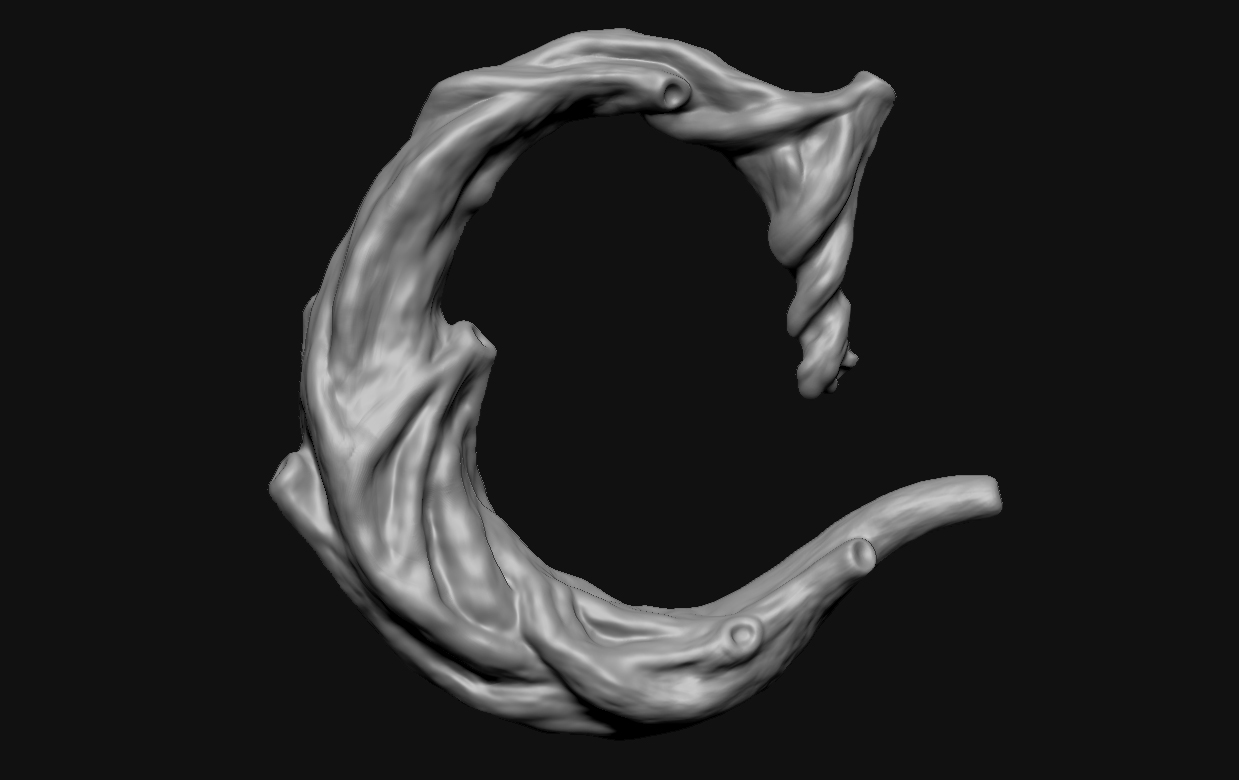 Purchase ↘
Eyck is available upon request.

←
→
NEW AESTHETIC VOL.2
Typeface
Print
In early 2020 I was honored to be invited to be part of Leonhard Laupichler & Sofia Brinkgerd's publication focusing on showcasing independent type designers. I was tasked to create a poster in 2 sizes for the book and an upcoming exhibition.
In this poster I wanted to feature Eyck's dual personality as well it's organic nature. On one hand it can be quite agressive, but occasionally it's gentle and mindful as well. I've created a 3D model one of the characters  in the form of a warped and twisted branch which served as the basis for the organic shapes on the final poster.
2020
Final Version
Variations ↘
Early Version
A2, 594mm × 420mm 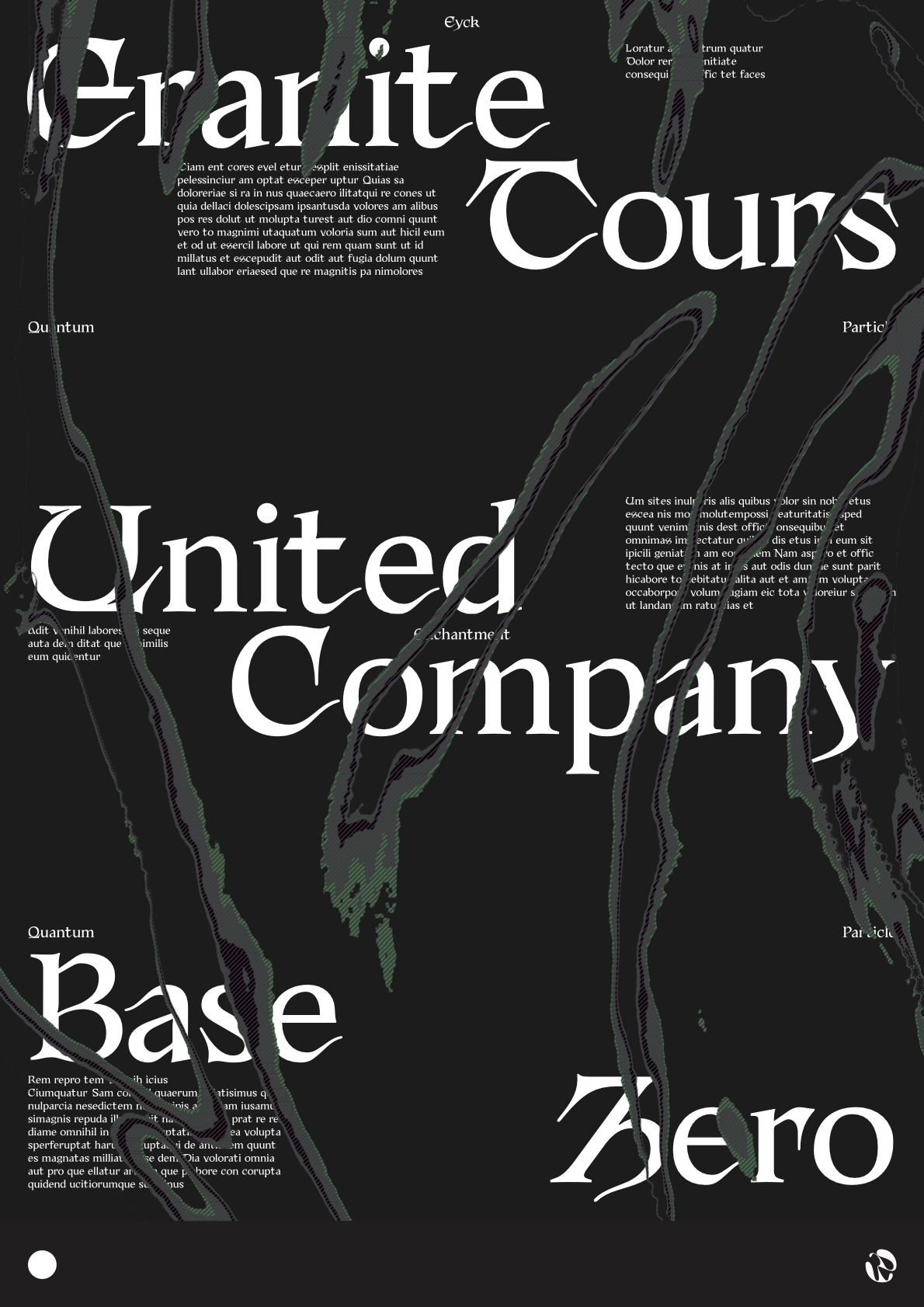 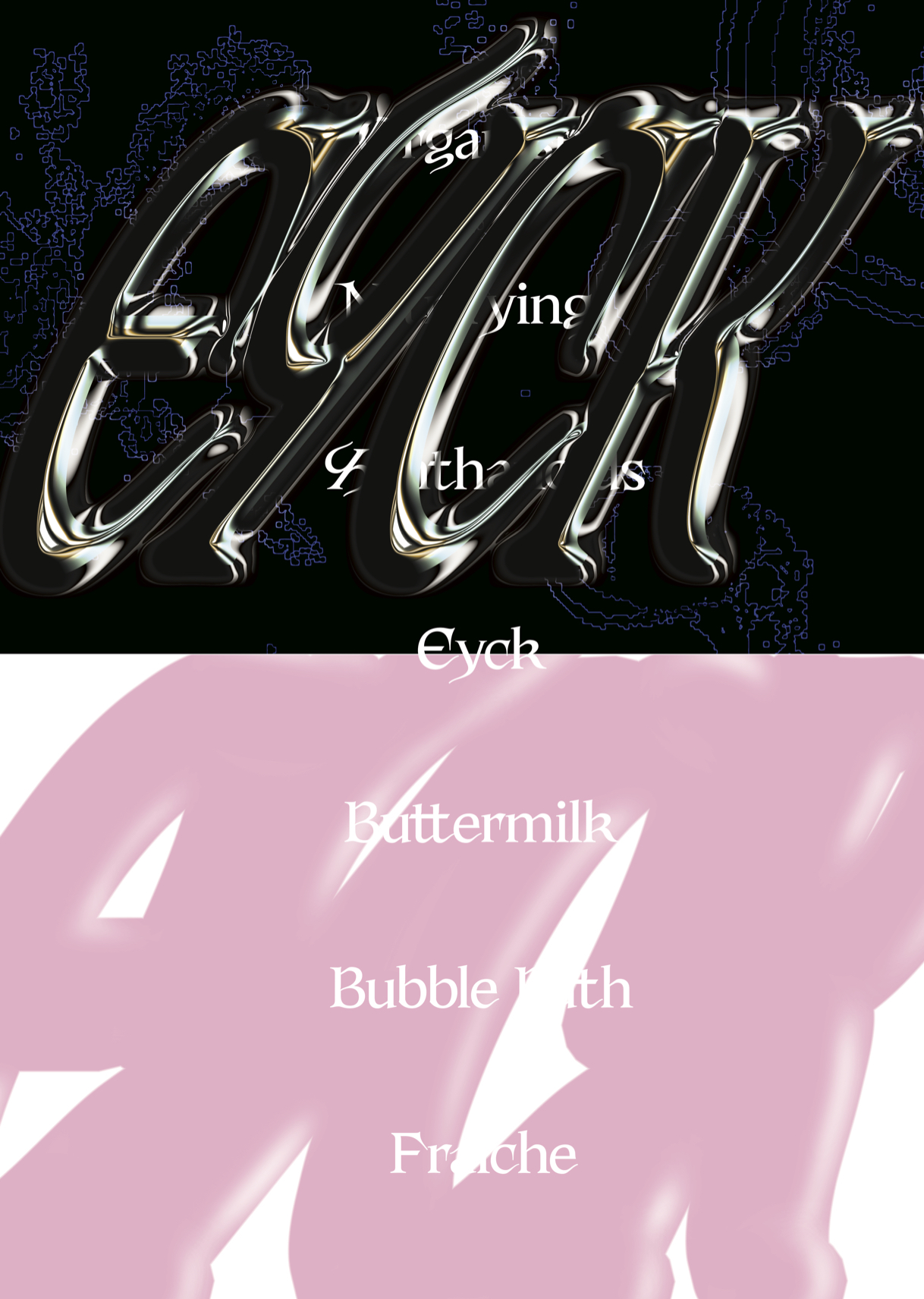 ←
→
Generative Visuals
Typeface
Animation
Code
I made a series of generative visuals by combining typographic animations with very geometric still frames. I've also turned this experiment inside out by making audio reactive and abstract animations which were then combined with the characters of Hanne as stills.
First, a piece of Processing code split the original AE and TouchDesigner animation into a customisable grid. Then, the still frames were overlayed on the pixelised animation based on the individual pixels' brightness values which resulted in unexpected outcomes.
2020
Animations ↘
Audio Reactive ↘ 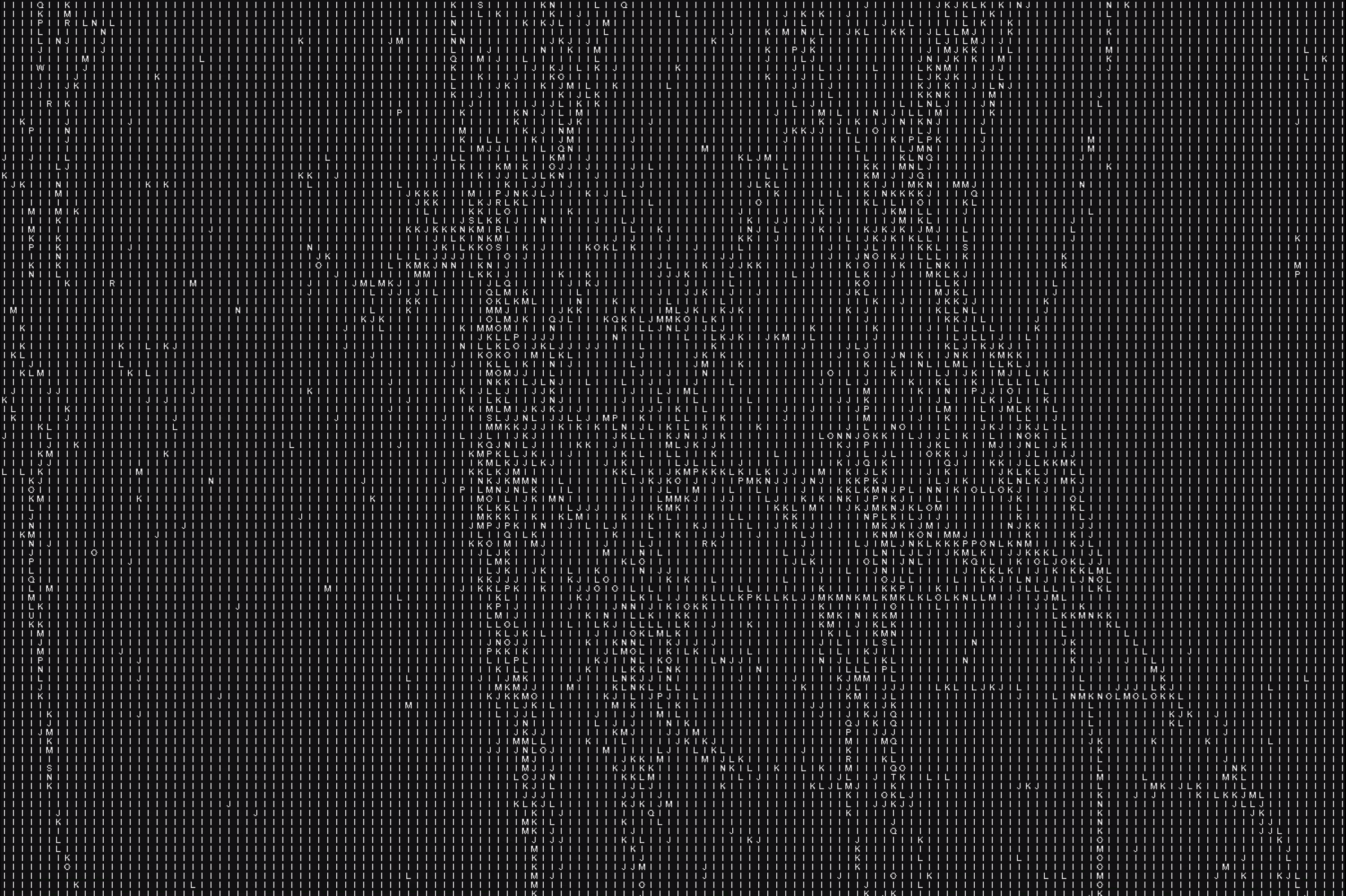 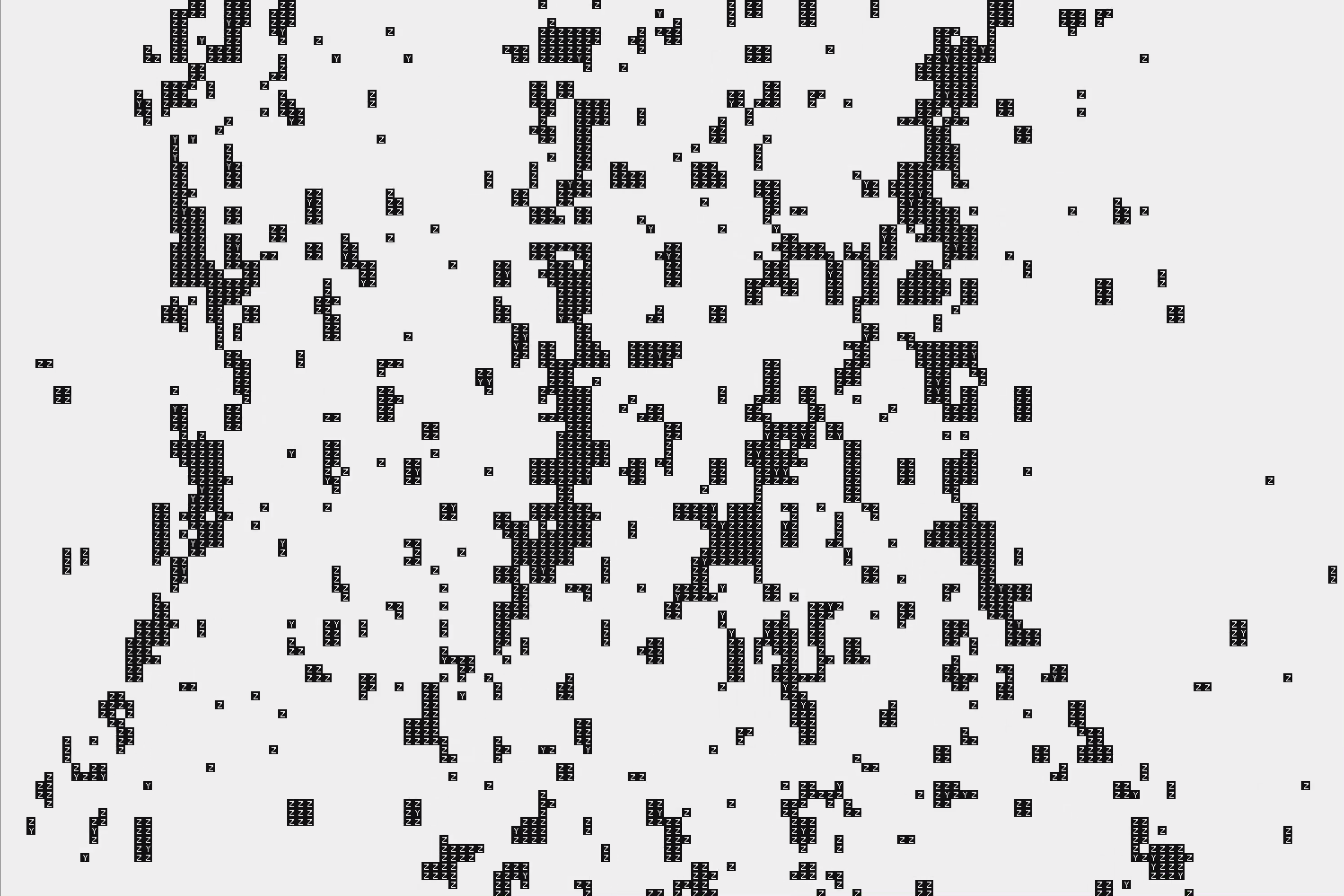 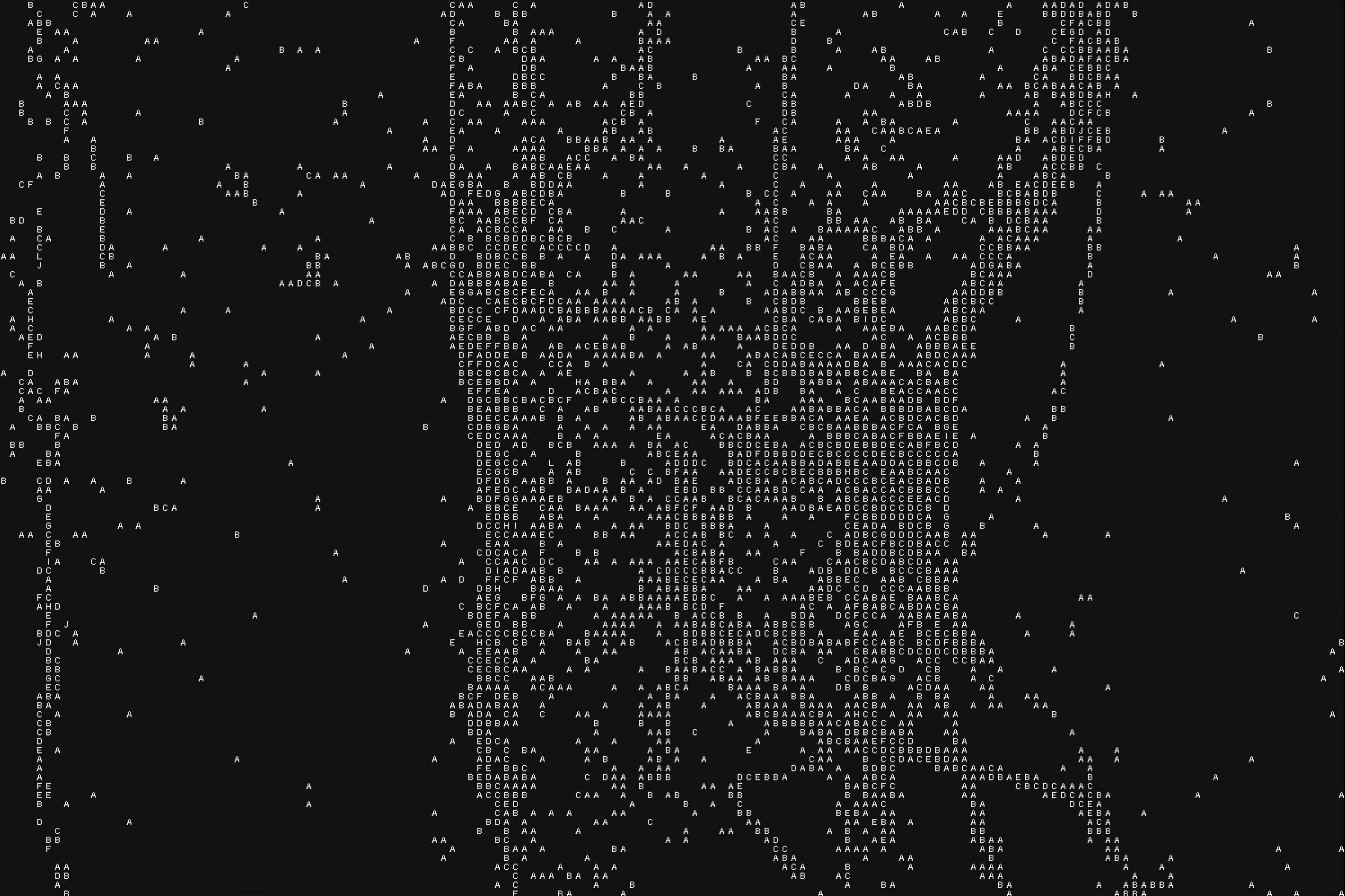 ←
→
DELIRIUM
Lettering
Print
During my Bachelor's studies I was part of a team making a fictional haute couture magazine specifically to display "unwearable" fashion. I was responsible for the cover design which mainly included custom lettering.
Both of these were inspired by the clothes. The title design was also inspired by the work of Craig Green, which can be seen on the alternative cover as well. Meanwhile, the Moncler Genius letterforms carry the puffy, cushioned look of their jackets.
***
2018
Final version
Covers ↘
Alternate version
A4, 294mm × 210mm 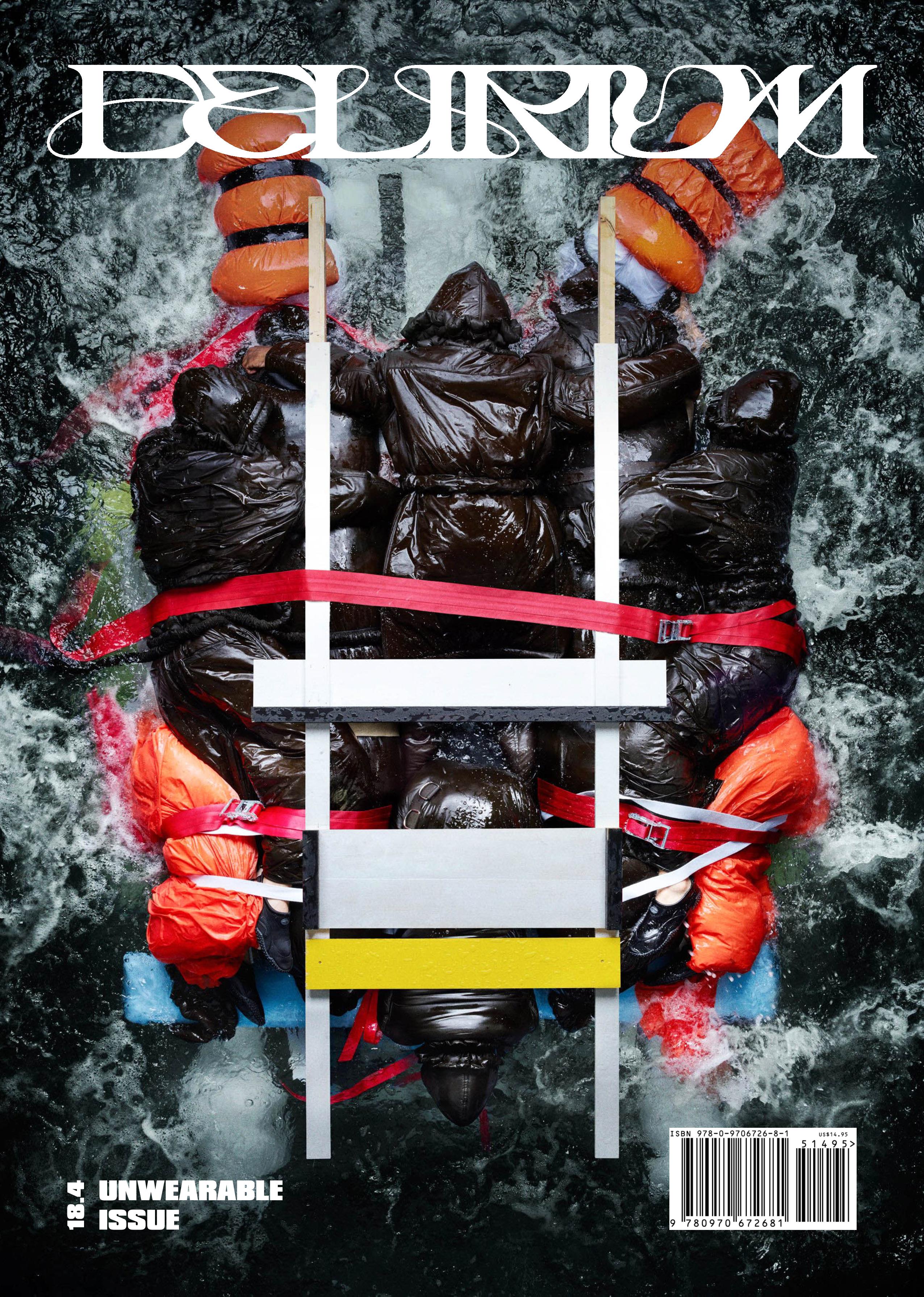 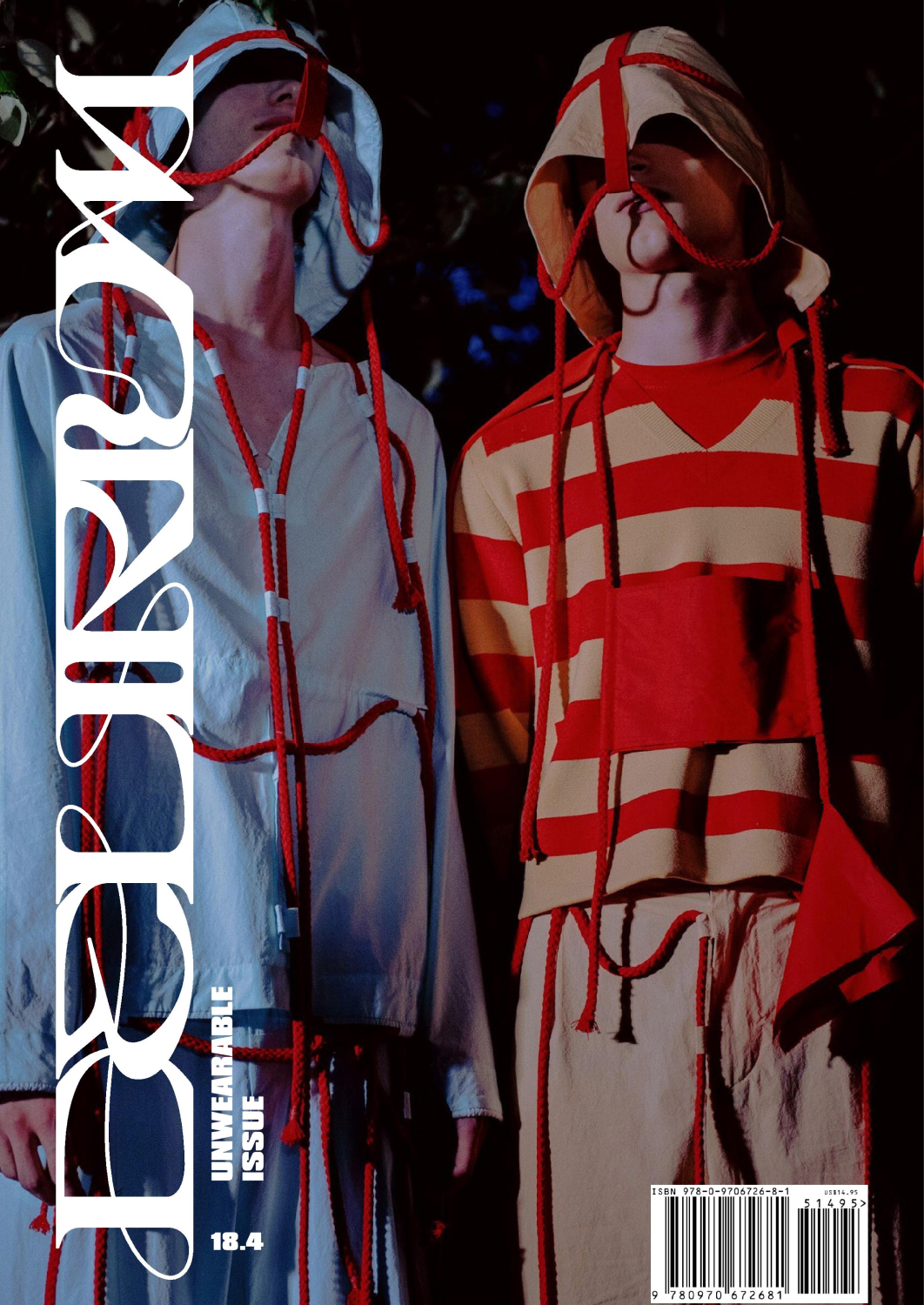 BA Graduation Project
Animation
AR
UI
For my graduation project in Communications and Media BA I developed a wayfinding systems that utilises world-scale AR technology to blur the line between the physical and the digital world.
While doing this it also serves a purpose and creates a digital wayfinding system guiding students and teachers from building to building on the university campus. It provides a playful interaction with the buildings with an element of exploration.
2019
Process ↘ 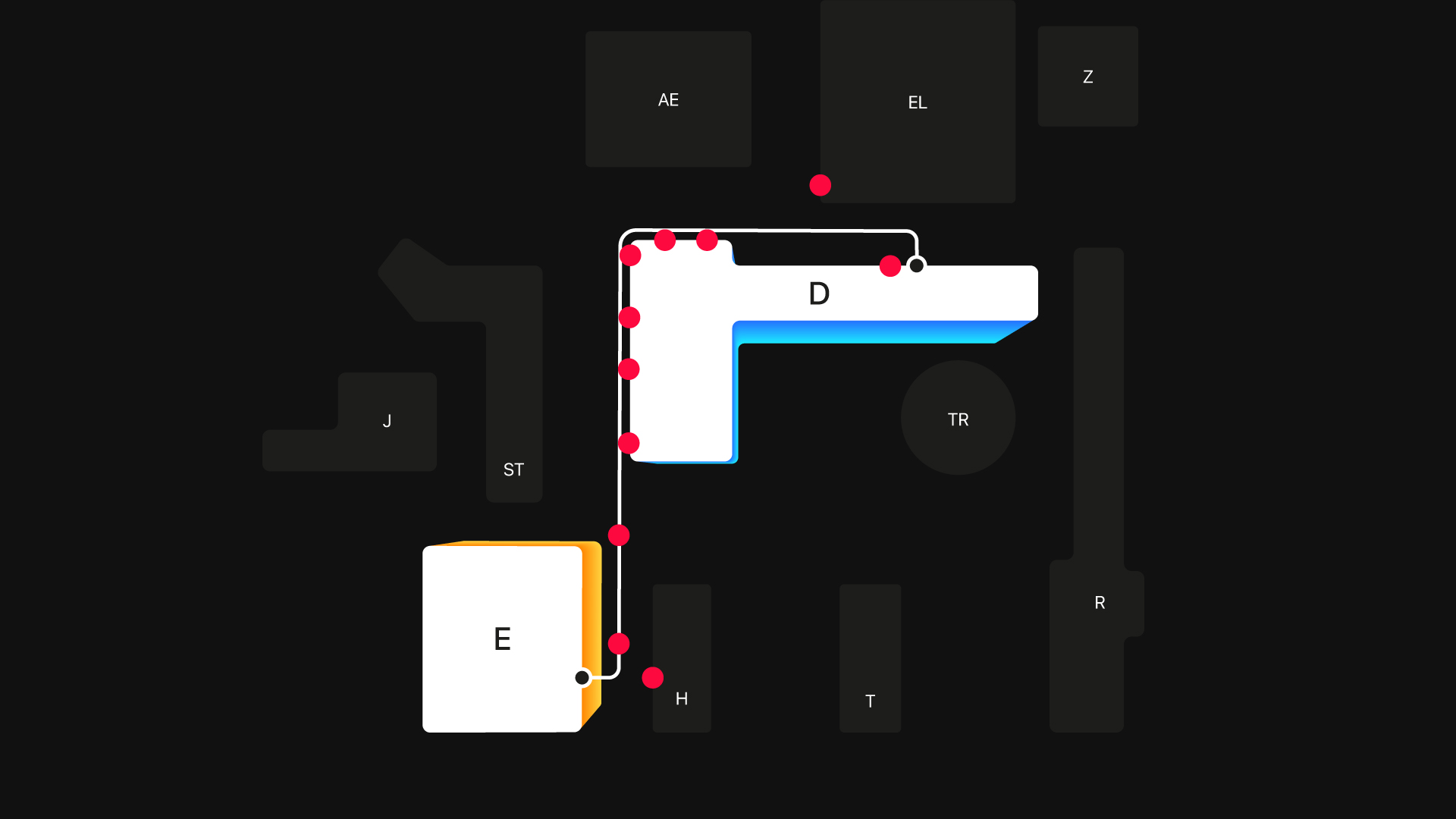 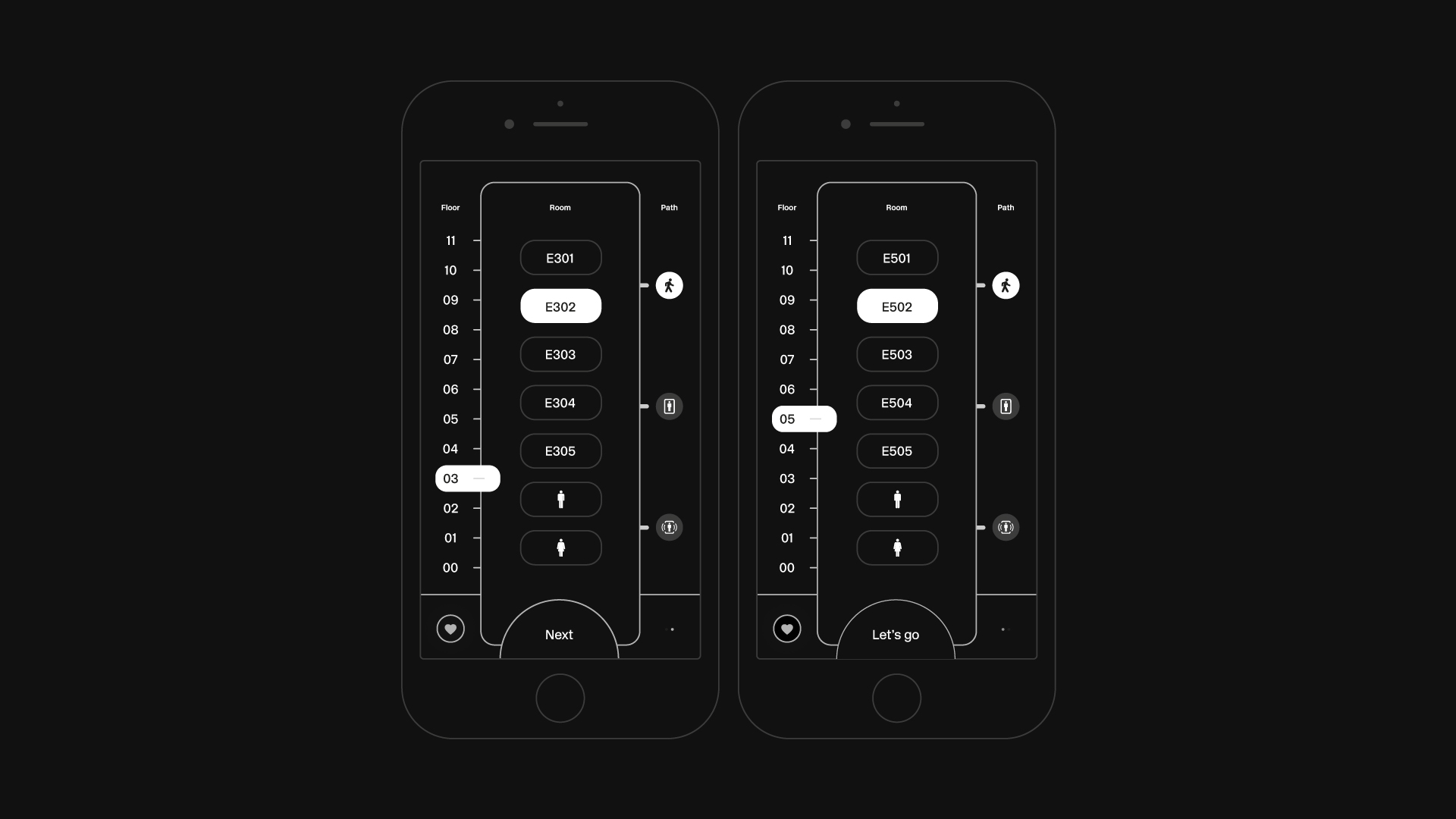 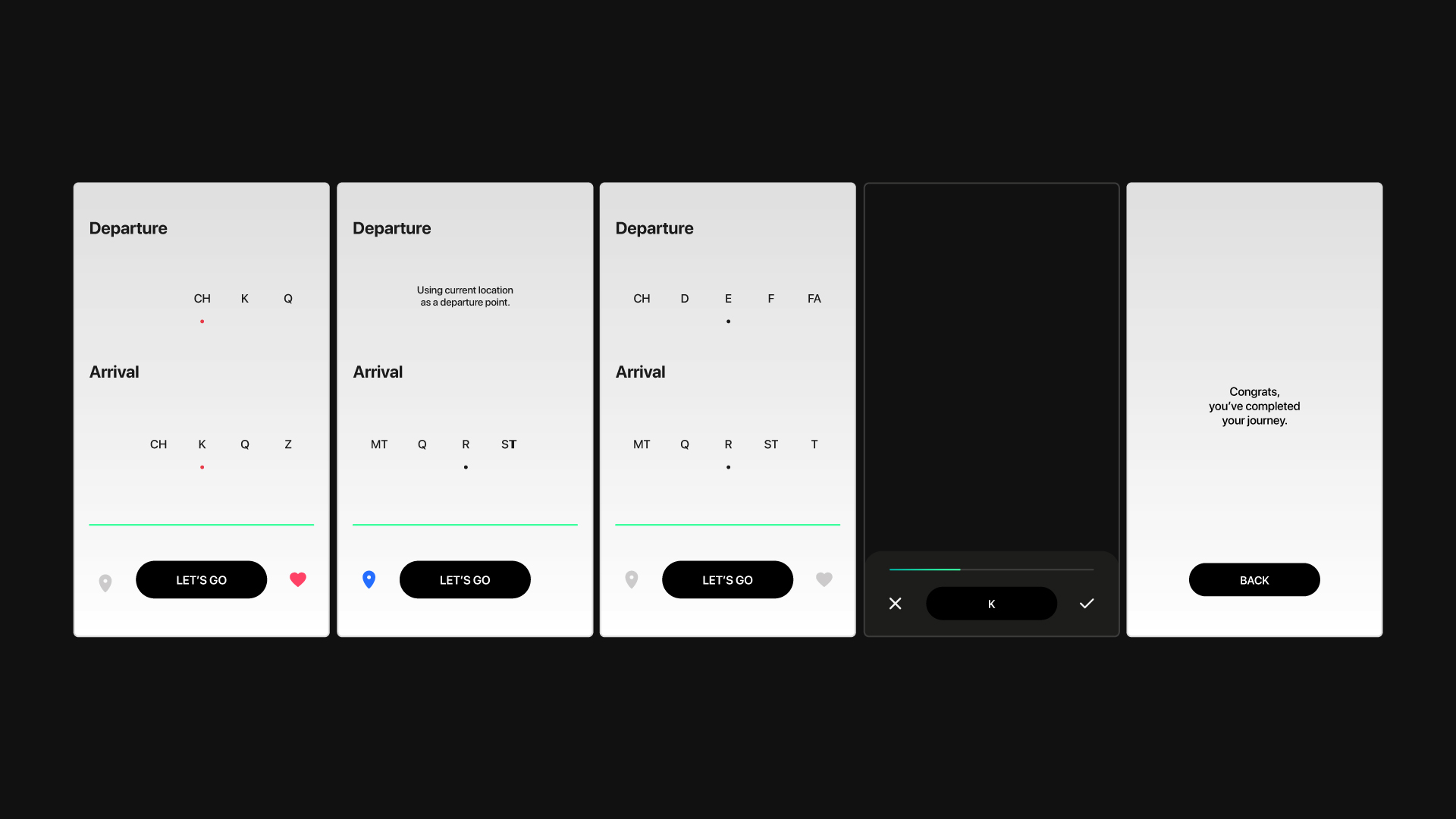 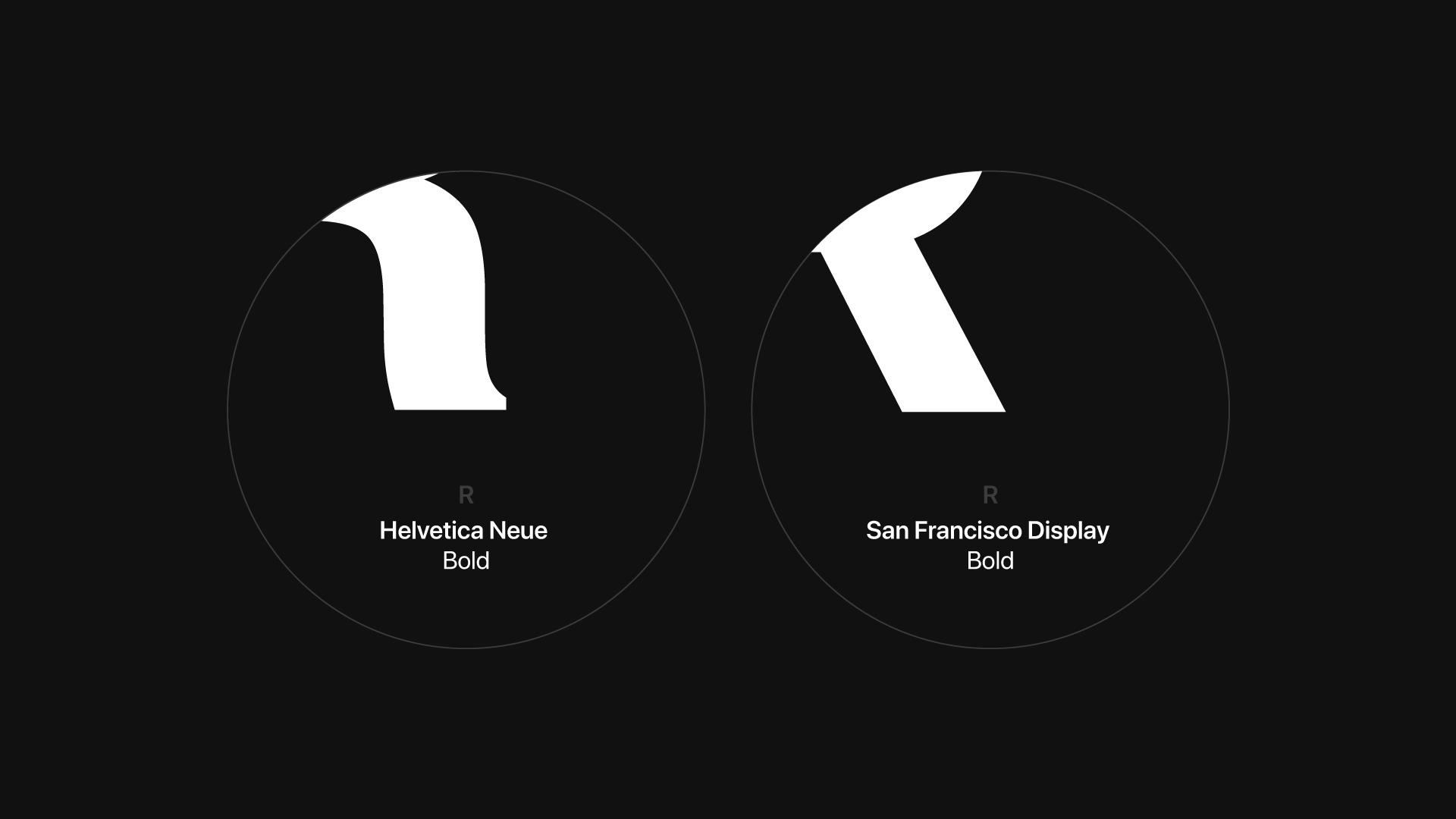 HAZE – Estudio Creativo WIP
Lettermark
I was approached by a newly formed Chilean creative studio to create an "H" lettermark which will serve as their logo as well. First, I was briefed to head into a direction with organic, circular and fluid shapes.
However, we broadened our scope to open up to a wider variety of looks. The project is still very much in progress, but I've been exploring letterforms ranging from very abstract representations to more straight forward and tranditional shapes that are the exact opposite of our initial direction.
2020
Early Sketches ↘ 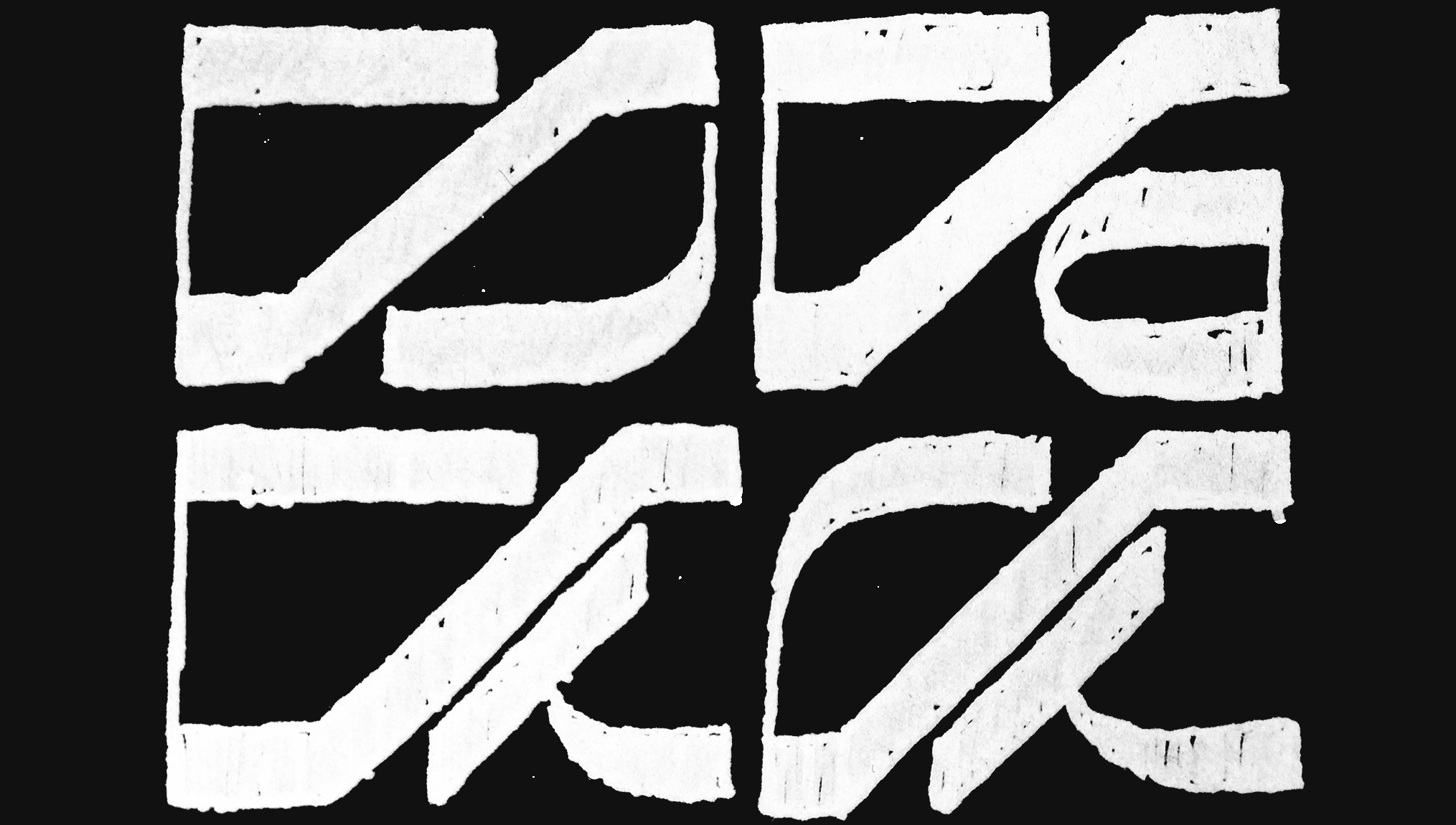 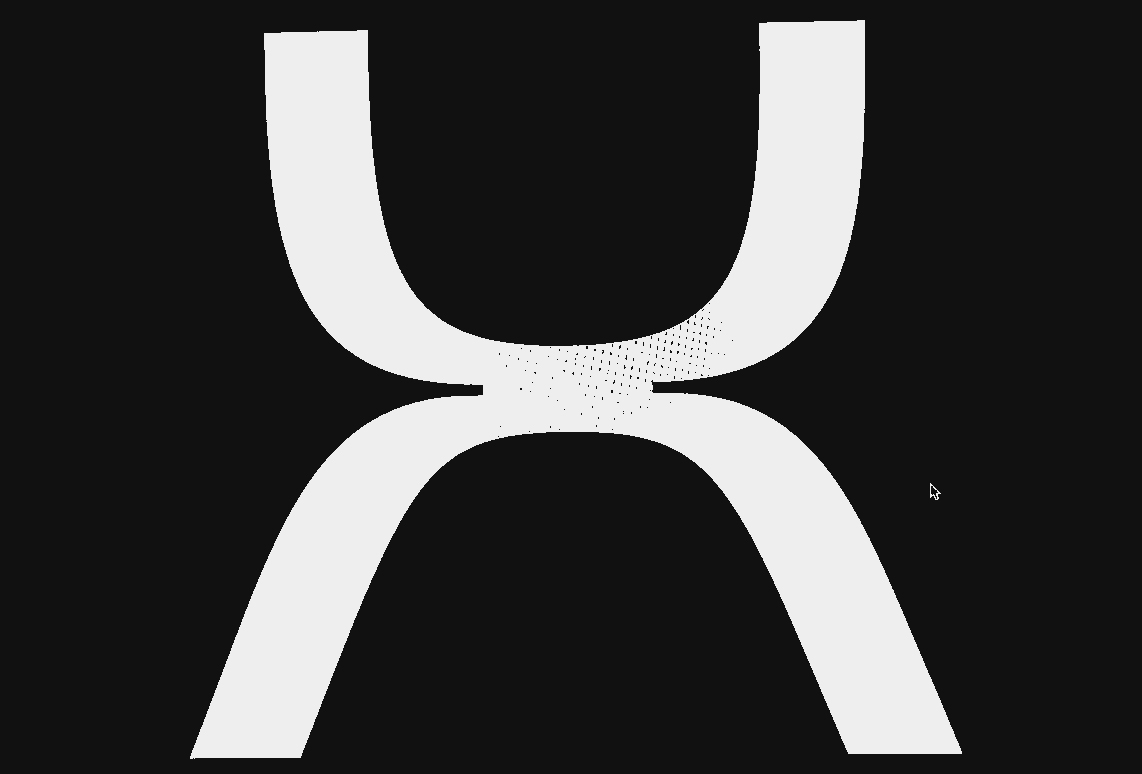 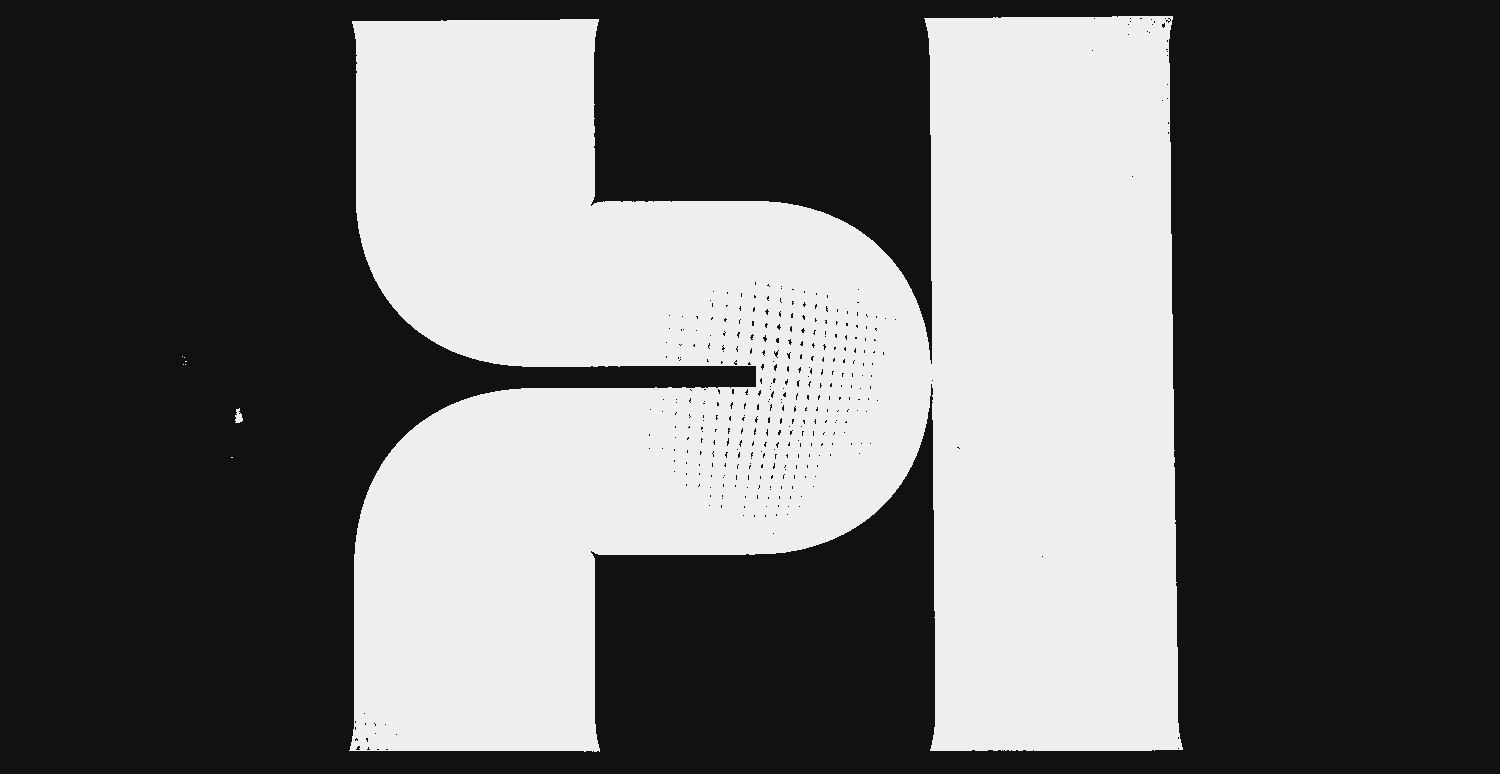 ←
→
Withdrawals
Sound Design
A collection of original songs recorded, edited, mixed and mastered in late 2016, early 2017. My first long-term project that included a great deal of learning sound design while also getting to know myself better.
More of an artistic project rather than working for a pre-defined brief, however I was aiming for ambient electronic soundscapes with a touch of oriental influence. Since then, I'm mainly interested in granular synthesis, generative music making & combining sound design with reactive visuals.
2017
Cover ↘
41 min 21 sec 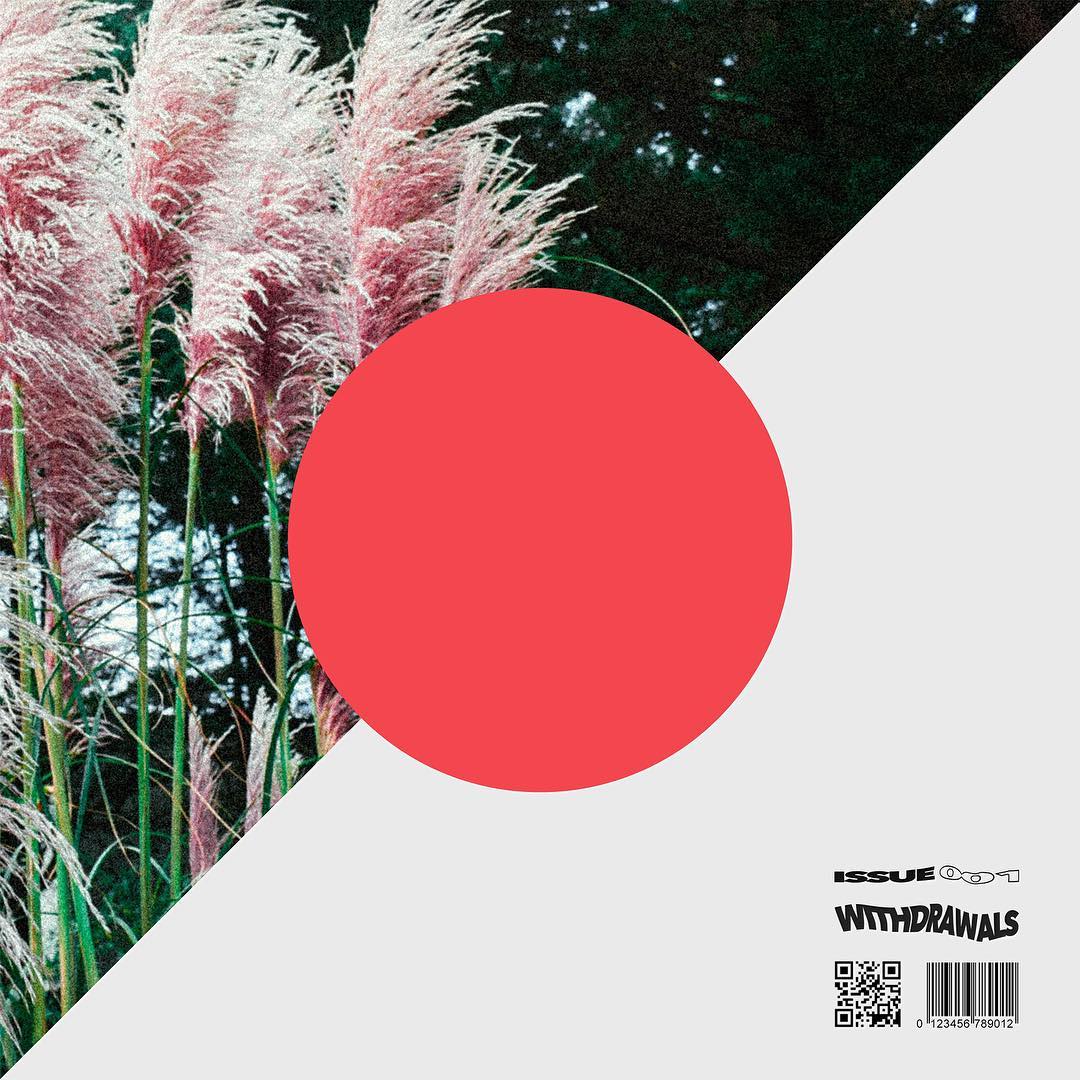 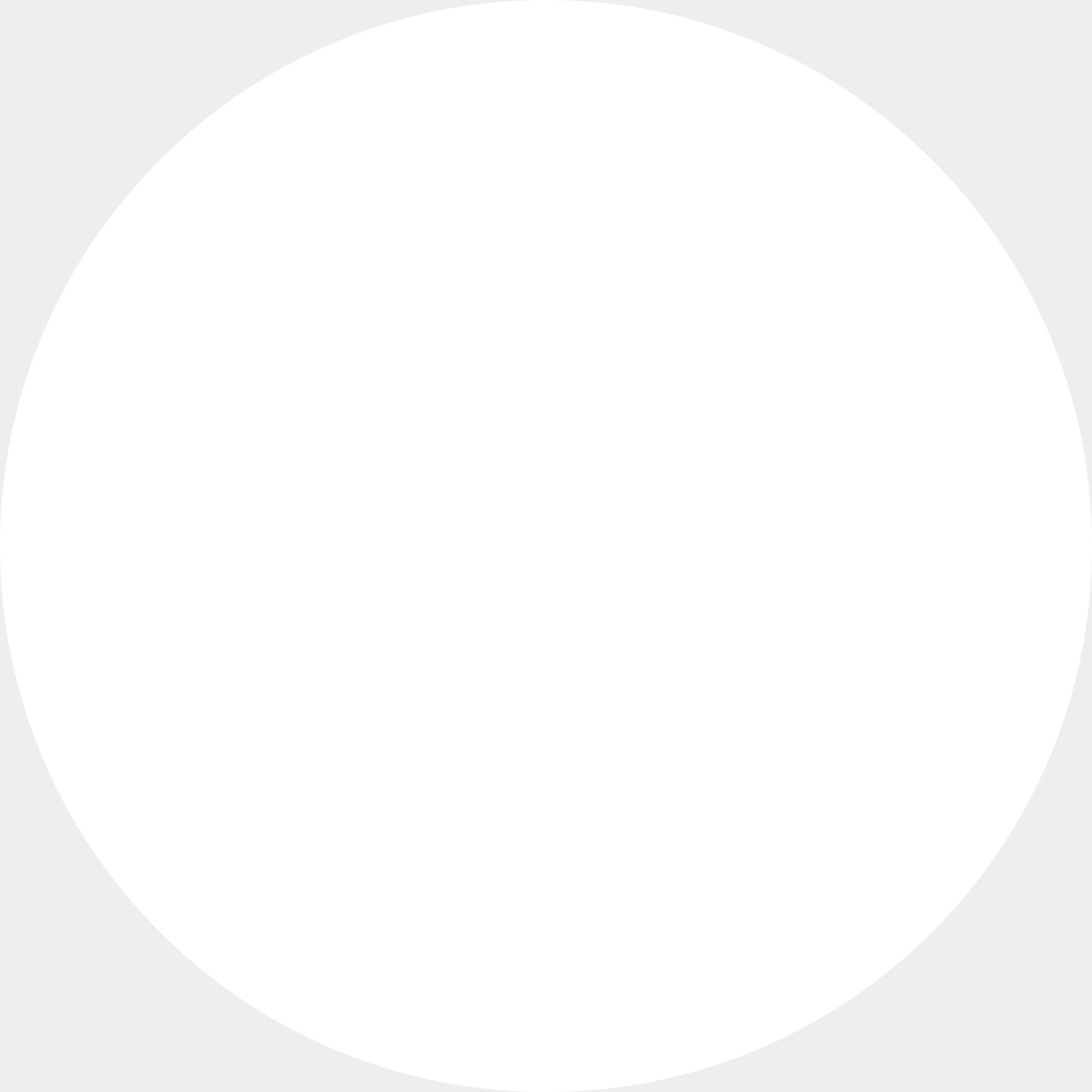